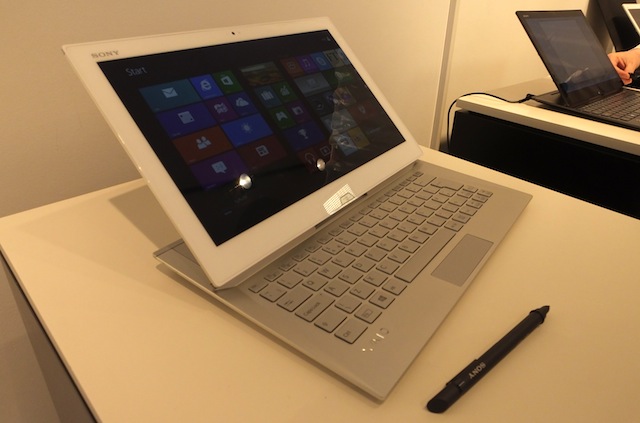 We’re a fickle bunch us tech heads – first we’re dying to throw away our digital stylus pens in favour of finger-sensitive controls, now (somewhat egged on by the success of Samsung’s Galaxy Note mobile range) we’re all for them again. Toshiba this week revealed new stylus-equipped Android tablets, and now it’s Sony turn to show the pen is mightier (or at least as useful as) the finger with the unveiling of their latest Sony Vaio Duo convertible laptop/tablet. We had a brief hands-on play with the 13-inch device at a press preview event yesterday.

A little larger than last year’s 11-inch model, the Vaio Duo 13 offers the best of both the tablet and ultrabook worlds, with a sliding hinge mechanism that lets the device’s touchscreen sit upright behind a full-size keyboard, or flat across the keys for something akin to a traditional tablet experience. 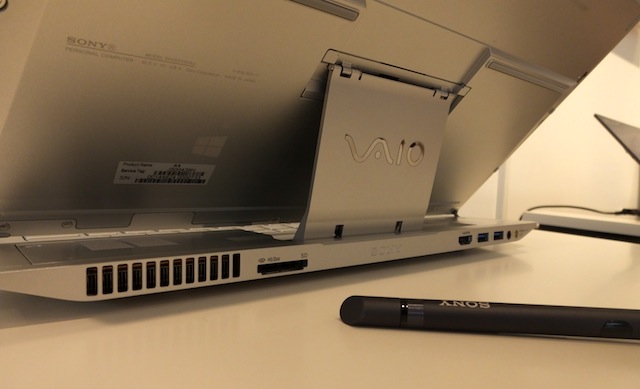 Weighing in at 1.35kg it’s reasonably light, though should be seen as an alternative to carrying both a notebook and tablet around, rather than being on a par in terms of size with the thinnest individual tablets or ultrabooks. 13-inches for a tablet may prove a little unwieldy for some too, though it’s great to have it as an optional set up.

Running Windows 8, the Sony Vaio Duo 13 also comes with a digitiser stylus pen for scribbling down handwritten notes. Updated to include a clip to house the pen when its not in use, removing the stylus from its housing automatically fires up Sony’s Note Anytime app, allowing you to start writing straight way without having to first fire up the appropriate app. Paired with a lovely, vibrant 1920 x 1080 display enhanced by Sony’s X-Reality, Bravia and Triliminos technologies, the pen proved responsive to our inputs, and also felt comfortably similar to a standard ballpoint. 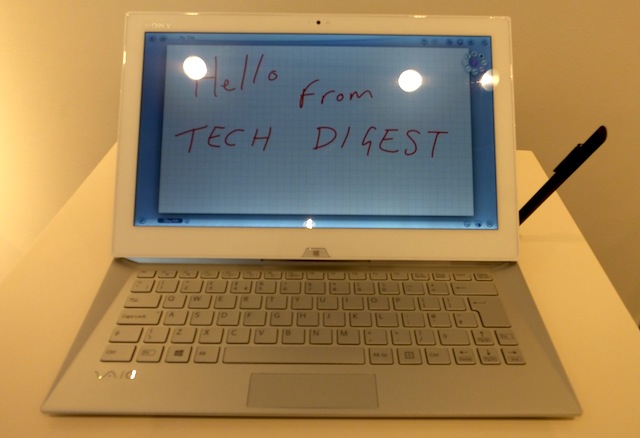 Likewise, despite being relatively small, the Vaio Duo 13 had a comfortably spaced keyboard with good travel. What seems to have been compromised as a result however is the size of the trackpad, which is just a thin slice below the keys. With both touch and stylus input also supported, and the ability to plug a mouse into the device’s USB port, perhaps that’s not such a big problem, but may cause difficulties when trying to hammer some work out with the Vaio Duo 13 on your lap. 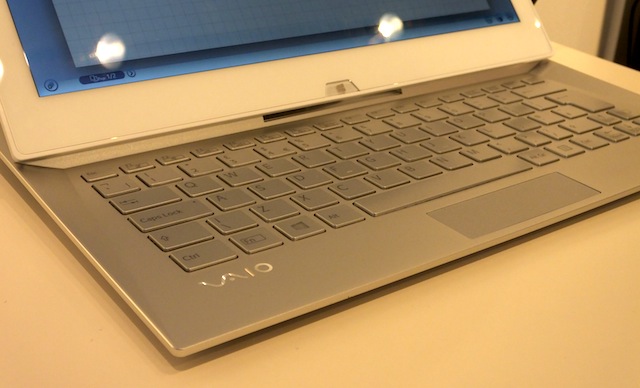 Those worried about the sturdiness of the supporting slider hinge should be able to rest easy. In our brief test it seemed solidly constructed and moved smoothly from one position to the next. Sony reps at the event also showed us a video of the vigorous stress testing the design has undergone, showing the Vaio Duo 13 hinge withstanding some pretty mean twists and bends.

Multiple configuration of the Vaio Duo 13 will be available, and can include 4th-gen Intel Haswell Core i7 processors, as much as 8GB of RAM and a 512GB SSD. There’s no option for a discrete graphics solution though, with only Intel’s HD4400 offered at the top end. Connectivity as standard across the range includes USB 3.0, HDMI output, an SD card slot, NFC, GPS and 4G LTE too. Battery life is quoted as 15 hours, but we weren’t able to confirm that during our brief test. 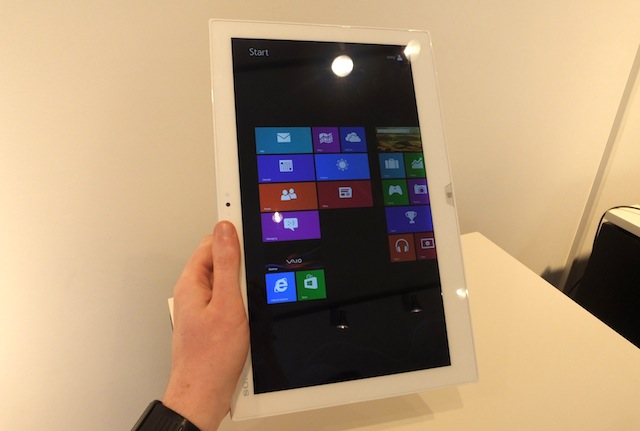 In a clever feat of engineering, the Vaio Duo 13’s battery pack also houses an Ethernet port, which then allows you to turn the charger into a router, acting as a Wi-Fi hotspot for multiple other devices.

Set to launch in black and white colour options, Sony have yet to reveal pricing for the Vaio Duo 13. Early impressions however are positive, making Sony’s latest slider one to watch.