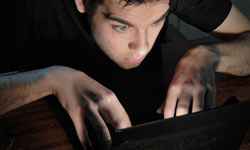 I’ve never heard of Hunched-Over-Laptop Syndrome (HOLS), but as I sit here in bed huddled over my laptop as I nurse an injured leg I can quite believe it exists.

Anyway according to a survey by Fellowes (the office equipment people – spot the vested interest here), 79 per cent of UK employees say that using say using work mobile devices, including laptops and tablets is making them ill.

The lack of specialist ergonomic equipment when on the move is the prime cause for the rise in work-related back and joint injuries, claims the survey, brought on by devices that promise to make our lives easier.

One in four report their posture worsens when working ‘nomadically’ (ie. not at their desk) and one in 10 now say this type of working has caused long-term posture problems when using handhelds, tablets and computers.

More than two thirds of those (65%) are forced to take medication to manage their condition and a staggering one in 20 has been forced to give up their job altogether.

And the health issues worsen with one in 10 complaining of being in constant pain and 17 per cent suffering some pain each day.

Worryingly, younger adults (those aged 18 – 24) are those most seriously affected as the research reveals that two thirds of young workers claim to have a problem caused by mobile working.

General practitioner and health broadcaster, Dr Sarah Jarvis explains: “Permanent desk spaces are the thing of the past with many of us working in a nomadic style. Mobile devices are meant to make consumers’ lives easier, but what we aren’t being warned about is the health ­dangers associated with working on the move.

“In many cases this so called ‘HOL’ syndrome is brought on by lack of ergonomic equipment. Job illnesses and ailments associated with poor posture are rising significantly and I am seeing more in my practice year on year.”