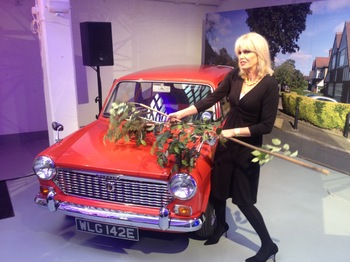 Not sure how many launches digital terrestrial TV service YouView has had now, but at the latest ‘official’ launch we were treated to national treasure Joanna Lumley appearing to beat the hell out of the original Austin 1300 car used in the famous Fawlty Towers sketch (actually she wasn’t hitting it that hard because the owner of the beautifully restored car was standing right in front of her).

Ostensibly the launch was to showcase the partnership with Talk Talk which will see the company’s telephone/broadband customers receive a YouView set top box for a one off charge of £50 covering the cost of an engineer’s installation visit, providing they sign up to TalkTalk’s service for £14.50 a month.

And while we reviewed the Humax box and were less than impressed by its facilities (particularly lack of wi-fi), if YouView can get the hardware right then it promises to be a useful service to those who want to watch catch-up services like the BBC iPlayer, ITV Player and 4OD via their TV rather than web tablet or games console.

To promote the official launch at the Vinyl Factory in London’s Soho, Talk Talk went back in time to recreate some of the best 10 TV moments in history, including the wrong chandelier moment from Only Fools and Horses which saw the usually glamorous Lumley exchanging high heels for a Talk Talk overall and holding a large white blanket. Very strange indeed.

Then there was an entire room from the 1970s showing Mr Ben on a lovely old boxy wooden TV set. Not sure which TV moment that was supposed to represent but it looked great – aah the good old days. See gallery from the launch event below.