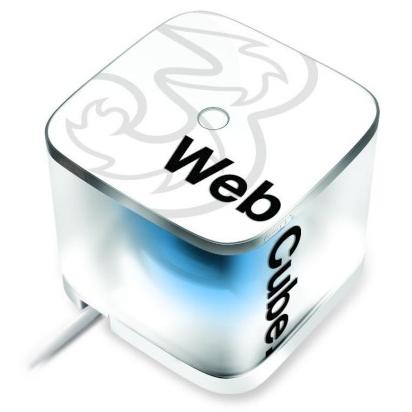 If you cant commit to a fixed-line broadband connection, but also cant live without internet access, Three’s latest Wi-Fi hot-spot generating 3G Web Cube could be just what you’re looking for. But does it perform well enough to tempt fixed-line users away from their contracts too? Read on to find out!

Three’s Web Cube will be most attractive to those that can’t commit to lengthy broadband contracts because of their ongoing costs, or those that move house too regularly to bother with the hassle of setting up a fixed-line broadband connection. Plugging in to a wall socket and connecting to the internet over a 3G connection, it’s simple to install and easy enough to move from place to place if you find yourself moving about a lot. However, while you don’t have to be tied down to a lengthy contract if you choose a rolling monthly deal, you are always tied to a power outlet; unlike other Wi-Fi hotspot generators, Three’s Web Cube requires constant power from a plug socket, meaning its portability is hamstrung.

That’s likely partially down to its design. A little bigger than a Rubik’s Cube, it’s rounded, cubed shape houses all the connectivity wizardry behind a frosted sheet of clear plastic, alongside some nifty blue LEDS. When on, the whole cube glows an icy blue, meaning it’d double up as a soft night light too. On the top of the cube are also four signal-strength indicator lights, letting you check the quality of your connection at a glance. It’s quite a nice looking device, but the design is marred slightly by heavy Three network branding all over what would otherwise be a stylish, minimalist bit of kit.

Connecting to the Web Cube is easy, as there’s already a SIM card pre-installed in it. You can easily access the SIM-card slot if you need to too. Plug the Web Cube into the wall and it straight away creates a Wi-Fi hotspot from a 3G connection. The Web Cube within seconds should then be identified by Wi-Fi enabled devices like tablets, laptops and smartphones, and it’s simply a matter of popping in the WPA2 eight character password (handily written on the bottom of the Cube) into your device of choice to connect. This Wi-Fi password can be changed using a web interface found at //3.home, where you can also switch off the main LED lights in the cube (but not the signal indicating ones) as well as access a rudimentary SMS sending and receiving application.

Three claim theoretical download speeds of 21.6Mbps and a top upload speed of up to 5.76Mbps. These are very much theoretical claims, despite the speedy HSPA+ connectivity in use here. While the actual average download and upload speeds we reached were around the 6Mbps and 2Mbps marks respectively (respectable speeds in the 3G hotspot market, might we add), don’t come into this expecting fixed-line style speeds.

Signal strength on the whole was good. We maintained a connection through a brick wall 20-odd feet away from the Web Cube, and you could likely add another 10 or so feet to that if you were using the Web Cube in a spacious open plan area.

However, connectivity can be hampered in other ways. Should you be living in a Three network blackspot, the Web Cube isn’t going to be any more than a fancy lamp on your desk, so make sure to check the quality of Three’s 3G coverage in your area before splashing the cash. Also, despite the fact that up to five devices can connect simultaneously to the Web Cube, that’s not to say they should. Web connectivity is incredibly stable when a single device is attached to the cube, but if more than two devices connect at once, and all are engaged in bandwidth intensive tasks like video streaming or online gaming, expect to see plenty of buffering icons, notable lag, and a steep drop in download speeds. Admittedly, you get the same bottleneck effect with a fixed-line connection, but with the speeds here significantly slower, you’re going to notice the issue a whole lot more.

It’s also worth noting the data allowances. At either 10GB a month or 15GB a month depending on the price tier, it’s not a device suitable for heavy downloaders or those that stream massive amounts of data.

The elephant in the room of course is Three’s own Huawei E686 MiFi, another wireless hotspot-generating 3G tool. Though slightly more expensive than the Web Cube, it has significant advantages in its pebble-sized form factor and portability, having the ability to be charged up and used on the go as you please, as well as all the other functionality of the Web Cube. It even comes with a dock if you plan on keeping it more or less stationary. With that already available, you have to wonder who will opt for its boxy brother.

How useful the Three Web Cube will be to you is very much dependant on how adverse you are to fixed-line broadband. If you’re regularly moving from place to place and don’t want to have to pay broadband installation costs for what will be a short stay, or cant commit to a lengthy contract, you’ll find the Web Cube very useful. However, if you’re using it in a household full of heavy web users you’ll notice a significant performance drop meaning it’s not best suited to families, while general speeds are slower than fixed-line connections. It’s a niche tool, and only when in the right hands will it really prove its worth. Having said that, if Three were to build one of these cubes with 4G LTE connectivity when the speeds become available in the UK, it’d be a very tempting prospect indeed…