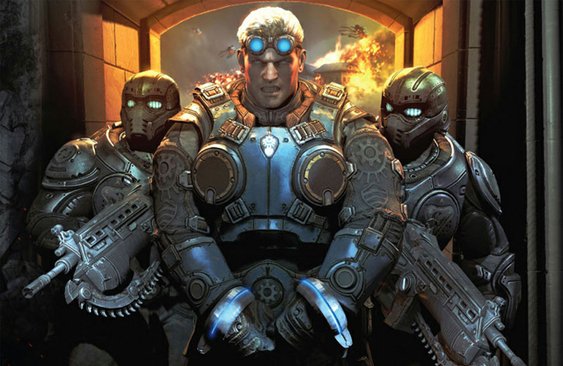 Earlier this week at E3, Epic Games pleasantly surprised many of its fans by announcing a new instalment of the Gears of War series. Many did not expect to see another Gears game grace the Xbox 360, expecting to see the next game to be on the next generation of consoles.

It appears that Judgement will not be following the story of the third Gears of War, but will instead be set 14 years before the first game, around the time when humans first made contact with the humanoid species known as the Locust. It seems that Marcus Fenix fans may be left slightly disappointed, as Damon Baird will be the protagonist in this Gears. Although the trailer suggests you will be playing along side the witty, sharp talking, one line spitting Augustus Cole and I’m sure many of the other much loved Gears characters will make an appearance at least once in the game.

This instalment is not a spin off, as many expected, it is a full on version of the game, it is still the same style of game play the fans have come to know and love. What has been revealed that will make Judgement different to the other Gears games is a new enemy spawning system called “Smart Spawn”. The Smart Spawn system will randomly spawn enemies in different locations, this means each time a player enters an area the enemies will be coming at them from a different area on the map, similar to the way in which zombies spawn in Left for Dead, so you will never know where the evil Locust will be coming from.

A new multi-player mode was announced for Judgement, named Overrun. In Overrun, like the previous games, you can either be human, playing for the COG side or play as the Locust. Where it differs is that this mode will be a class based online mode, where each class and side will have its own specific strength and weakness. It seems the COGs play as a better defensive role, building traps, setting up turrets etc. Where the Locust play better as the more brute forced, aggressive role. On the human team you can play as either a; Soldier, his abilities include dropping ammo for follow team mates, the Engineer, who can build traps and other defensive structures, the Medic, who heals injured players and the Scout, who can go and spot the enemy. The Locust will have an equally diverse class system from the brute Grenadier, who acts like a tank, to the fast little Tickers that speed around the map.

All in all, Gears of War: Judgement seems like a game for the fans to be excited about, by offering some nice additions to the series. It may very well be the last instalment of Gears for the Xbox 360, as I can imagine the next time we see the Gears emerge it will probably be on the next generation Xbox.

There has been no release date announced as of yet for Gears of War: Judgement, but you can expect to see it early 2013. Like the previous games it will be exclusively on the Xbox 360.