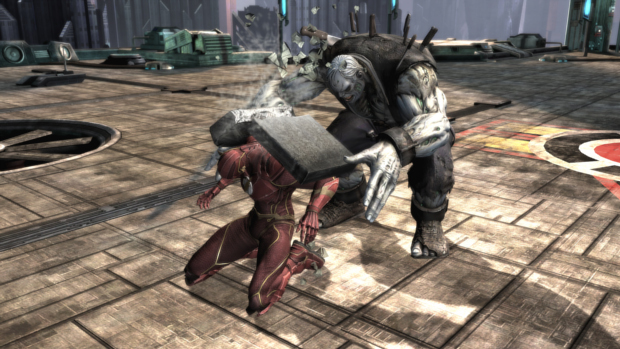 NetherRealm Studios previewed their new DC related game today. The studio which brought us the Mortal Kombat series previewed a fighting game which will see all your favourite DC characters beating the snot out of each other.

When I heard about Gods Among Us, my initial reaction was “oh basically DC vs Mortal Kombat”. However from looking at the game play that was shown today at E3 I’m happy to admit I was very wrong. The first thing that strikes you about Gods, is that the graphics are absolutely stunning, even though its still in the early stages of development, each of the costumes had an amazing amount of detail with various textures on them that made them look stunning, Superman’s costume looked particularly good.

One element which seemed to stand out during the demonstration was stage interaction, one scene during the demo saw Solomon Grundy take a roundhouse kick to the face from Flash which sent him flying through a sky-scrapper, going through every floor then exploding out of the other side to land on what looked like another fighting area. Also during the demo they showed interactions with the broken environment, one particular event which demonstrated this nicely was when Solomon Grundy bashed Batman with a car, only after Batman had Slammed Grundy’s face into it.

They did not show all of the characters that will be available for Gods among us, presumably because this game is still in early development, but what we saw was extremely exciting; Batman, Superman, Harlequin, Solomon Grundy, The Flash and Wonder Woman. The stages shown were; Fortress of Solitude, Future City and the Bat Cave. All of which felt like they had a dark twinge to all of it, suggesting the game may be for more mature audiences.

Although this is a NetherRealm game do not expect vast amounts of gore as it has a DC title attached to it, so the developers may want to allow younger people play their favourite super heroes, so you may not get those gruesome fatalities NetherRealm is famous for. Do not let this put you off, the game does look like there will be some amazing special moves. For example, the demo showed a move where The Flash ran all around the world to come back around to a hunched over Superman,to deliver one hell of a punch.

Do not expect Injustice: Gods Among us out any time soon, there was no release date announced. I predict it will either be out sometime next summer or early Autumn 2013.