According to StatCounter, Google Chrome crept up the usage tables to overtake the veritable Microsoft offering for the first time last week.

Though an imprecise measurement system (based on scaling up the results of relatively small survey groups), Chrome’s rise has been clear to see for some time. Though Internet Explorer and Chrome were neck and neck for most of the month of this year, the scales are now tipping in its favour at the expense of Microsoft’s browser, as well as Mozilla’s Firefox, Apple’s Safari and the Opera browser, which round out the top 5. 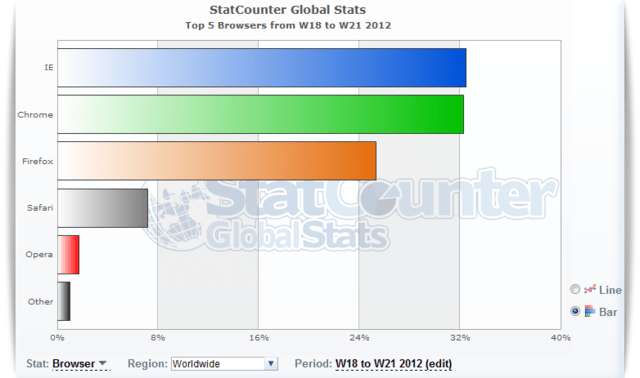 It’s been a meteoric rise for Google’s browser, which launched in 2008 and features handy extension tools for a more rewarding web browsing experience.

Microsoft will not take the loss lying down however. Expect to see a big web-push from the Redmond tech giant with the launch of Windows 8, which will likely also see Internet Explorer 10 released alongside it.