The PC gaming community has always been one step ahead of their console counterparts in terms of graphics thanks to the quicker turnover of top-spec hardware components hitting the market. But a video popping up online this week has got gamers the world over very excited through its promises of massively enhanced graphics through the use of new technology at the development stage.

A company called Euclideon have been beavering away at a new graphics engine for games developers called the Unlimited Detail engine. For a detailed description of how it works, you should hit the demo video above, but basically the engine swaps out polygons (the limited, angular building blocks of game model design) and swaps them out for “atoms”. Just as they are the building blocks of life, Euclideon claim that their Unlimited Detail engine can be used to make detailed levels and characters by using near-infinite amounts of atoms.

There are already similar systems in use in the medical fields, but previously they’ve been limited to a handful of detailed models at once. Euclideon claim that very soon their engine will be able to handle so much data that an entire game can be built around it, and that real-world objects will be able to be scanned into a game, indistinguishable from their real-world counterparts..

It’s impressive, and if proven true, would be the biggest leap forward for games graphics since the jump from sprites to the polygons Euclideon are looking to replace. Euclideon are hoping to have an SDK ready in just a few months time.

But the system already has its skeptics. Notch, the developer behind cult indie-game Minecraft has practically written off the Unlimited Detail engine, instead pointing interested parties in the direction of the Atomontage engine, pictured below: 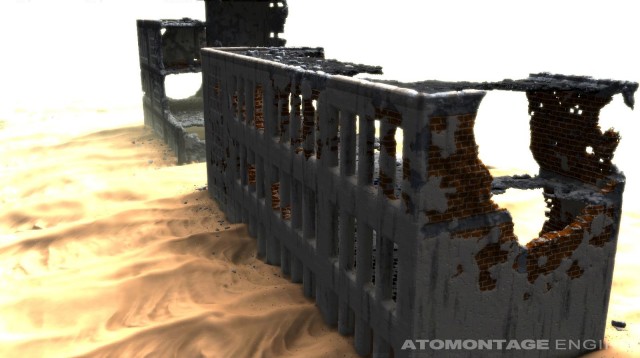 You can view videos of the engine in action by clicking here.

The Atomontage engine works on similar principles to Euclideon’s solution, “with voxels representing the vast majority of the content, and other atom-like elements making up the rest” according to their website.

Voxels allow for vast amounts of particles, each with their own behavourial elements, to be used without ridiculous amounts of memory consumption in real-time.

Most interestingly however is that Atomontage uses atom-based representation to convert atoms from one form to another. This is going one step beyond blowing a destructible building into rubble (which it can also easily handle) but turning water into mud when mixed with dirt, in-game, for instance.

It’s almost like sci-fi stuff being bandied about by both companies, but both are offering a glimpse into the future of gaming. It’ll take a while before anything like these technologies becomes the standard for game design (let alone affordable machines capable of handling their creations for the average gamer), but when they do, we may finally be able to pop blocky-headed characters and box-like bushes into the videogaming history books for good.