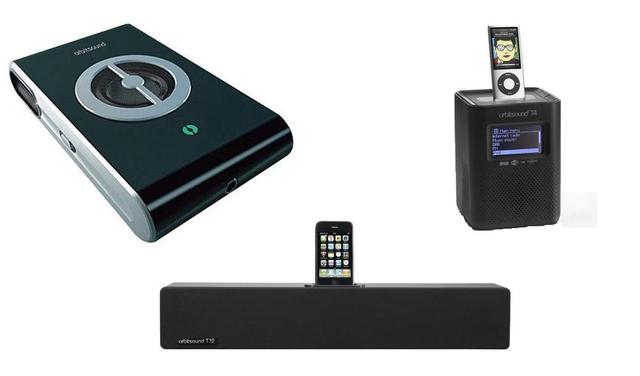 British audio manufacturers Orbitsound launched a host of new gear last night, ranging from portable speakers to soundbars. Each incorporates the unique Orbitsound technology, which many are hailing as a game changer for the audio industry.

The Orbitsound gear has been developed alongside Ted Fletcher, British musical luminary who has worked with such industry legends as the Who, the Eagles and the genius Brit producer Joe Meek. Fletcher has spent the last few years working on the Orbitsound technology, which does away with the “sweet spot” found in traditional stereo speaker set-ups, meaning that you get stereo “spatial” sound no matter where you are in relation to the audio source.

Three new products were on show at the launch event last night. First up was the Orbitsound T12 v2 Soundbar, a variation on the previously available T12 soundbar which now includes ports for digital inputs. With a black lacquer finish, it makes for a drastic sonic improvement over the majority of speakers found with flatscreen TVs. It also has room to dock iPhones and iPods too, and can be hooked up to a sub-woofer if you’re looking to beef up the bass frequencies. It hits John Lewis stores this month and will set you back £300.

The Orbitsound T4 Radiopod was next in the range. An iPod dock with DAB, DAB+ FM and internet radio, it features a built-in Wi-Fi connection so that you wont need an unsightly Ethernet cable to tune into the web stations. It launches in the summer, priced £180.

Rounding off the set was the reasonably priced Orbitsound T3 portable speaker. A soundbox around the size of a Nintendo DS, it too squeezes in the Orbitsound tech in order to give you a more satisfying stereo effect whilst on the go. You’ll get ten hours out of it’s rechargeable battery when fully charged, and it will cost around £50 when it is released later this month.

There’s a lot of promise in the Orbitsound technology. I’d love to see it powering a really meaty home-cinema set up, an audio area where the importance of being in the “sweet spot” is none more profound. Definitely a company to keep a close eye on.