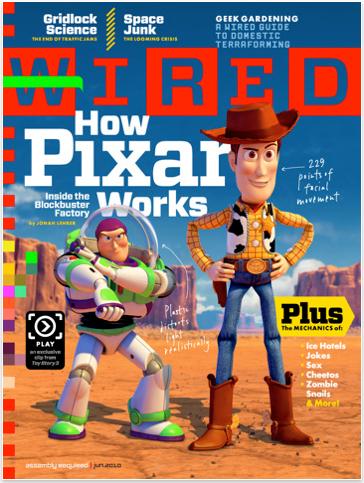 Wired, a magazine founded to cover all aspects of the digital age we live in, was always destined to hit the iPad. It was probably written in the stars somewhere – a match made in tech heaven, where high quality tech-centric editorial fuses with the most highly sought after gadget in the universe. Thankfully, publishers Conde Nast Digital have thought long and hard about how best to hone the magazine app to take advantage of the new platform. It’s more or less a perfect example of how magazines can make the jump to the iPad worthwhile, and you can see that the vast resources of the publisher have been fully exploited in the few years its taken to develop. There are still a few niggles however that will frustrate, especially for those used to the freedom offered by web based content. 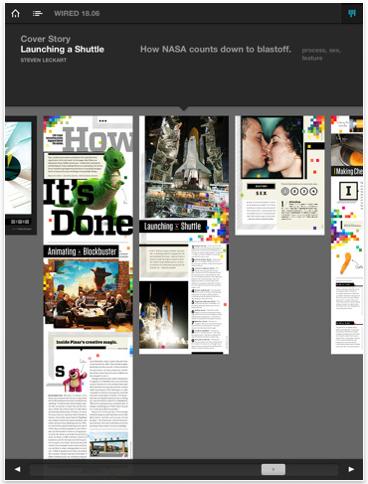 Each page has been optimised for use on the iPad, and in most cases, completely rebuilt from scratch compared to the printed version. Navigation is a breeze, with editorial content linked from a drop down content page, as well as links on the cover allowing you to jump to the headline stories straight away. Of course you can scroll through pages using a scroll bar in a more sequential manner if you’re looking to read the issue cover to cover, but there is also a “Browse View” which stacks content together to be jumped to quickly. On a few rare occassions pages that feature lots of heavily interactive touch content can be a bit sticky to swipe due to thier being many sensitive points on the page, but there are enough ways to browse the magazine app for this to be only a minor issue. Everything loads quickly, and so far (fingers crossed) without a glitch or a stall at all.

Photography within the app also takes advantage of the new platform. Tap a picture to zoom into it, and the image will automatically adjust itself dependent upon the iPad’s accelerometer orientation. It would have been nice to have had a little more control over the images though, perhaps being able to save a few and email the best pics to my freinds, though I can understand that copywright restrictions mean that’s unlikely. Galleries can be tapped through too alongside text, and fare favourably when in comparision to other iPad magazine or photo gallery apps, and surprisingly, web based galleries too.

Things get really interesting with video and animated content however. There is video content embedded throughout much of the app, including a quick trailer of Toy Story 3 in HD. Video runs smoothly and fires up almost instantaneously. But it’s when the video and animations are interactive that the Wired app really starts to show off. 360-degree images of Iron Man and Mars lunar landings can be span around and checked out from any angle, with pop-up information as you do so. In fact the article on space missions was probably the highlight overall, tying together some entertaining and informative prose with the best integration of the iPad’s touch features. The “Space Junk” timeline will have Greenpeace members wailing, if their jurisdiction stretches beyond our own atmosphere that is.

Interaction is key to iPad publishing, and the Wired app is making some very good first steps towards integrating it. There’s a great feature that allows you to construct a song using some building-block audio samples and it was also nice to hear some pertinent music relating to the Trent Reznor/ Nine Inch Nails feature. It would have been good to have the option for more music throughout, though to be honest I suppose it’s only really necessary with music-related features. I also expected to see more gaming style content in the magazine, which seems a real oversight given the Toy Story tie-in for this feature. Perhaps it’s the lack of Flash support on the iPad (which would allow games to be produced quickly and cheaply) that’s holding that back? Even so, embedding a quick app game surely can’t be that hard? You do get a touch controlled bottle of Worchestshire sauce though, which may be the most unexciting consolation I could possibly think of. 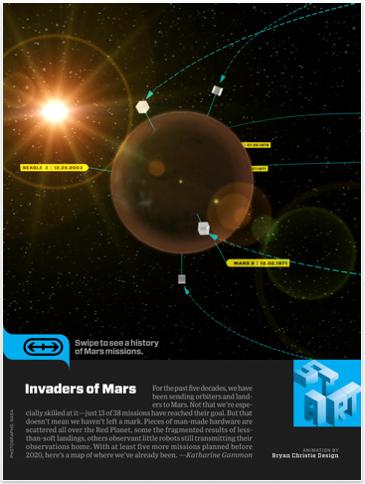 Even the advertising gets an iPad makeover, with slideshows and videos all featuring. It makes advertising pretty fun actually, which is great news for brands. The Wired adverts were mostly interactive, and I was definitely intrigued enough to play about with them, rather than skip through to the editorial content. Again, the use of galleries was clever, letting me get a nice close look at the Olympus PEN E-PL1. That said, there are a hell of a lot of adverts in this issue, and for a web-savvy audience used to filtering through to just the content they are interested in, there is a little too much “push” here. A better balance between content and advertising has to be found if Conde Nast hope to pick up a loyal iPad following.

The main drawback of the app really comes from what is also one of its most useful features. The Wired iPad version is entirely viewable offline, meaning all the animated graphics, videos and sounds can be accessed whether you have an internet connection or not. The problem is however, that that means each multimedia-rich issue will come as a hefty download. This first June issue for example weighs in at 526MB. Not only is that a relatively time-consuming download, it’s also going to be a real blow to your data charges if you’re getting it over 3G when on the go.

All in though, its a great effort overall. Its Achilles heel is that mammoth download, but that can be forgiven considering the excellent offline functionality it provides. All that’s really missing is some social networking features (which the opening letter from editor Chris Anderson suggests is on the way anyway), allowing you to post snippets of your favourite stories to Twitter or Facebook. Throw that in and I’m completely sold on getting the iPad version over the physical printed version. Oh, and at £2.99 it’s a pound cheaper than the traditional magazine too. Sweet.