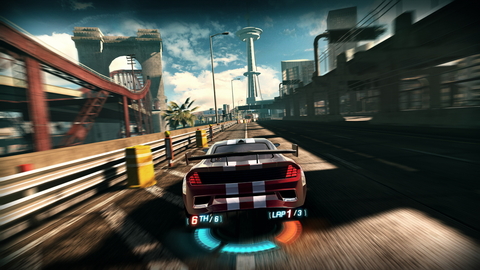 What do you get if you cross the team that brought us the excellent off-road racer Pure with about a zillion tonnes of TNT? That’d be Split/Second: Velocity, the latest driving game from Black Rock Studios.

Tech Digest recently got to have a quick sit down with some early code of the game. A mix between Burnout’s high-octane racing and an adult-orientated, explosion-filled bout of Mario Kart, racers don’t only compete with other drivers, but also with destructible tracks that can be triggered to topple down upon you and your opponents.

So, by drifting tight and showing off some nifty manoeuvres to put Jenson Button to shame, you build a power meter which allows you to knock sky scrapers and fly-overs onto the track, totalling other drivers and changing the route of a race. But why are the lovingly-detailed tracks destructible you ask? Well, not just because it’s a blast to play (no pun intended) but also because within the context of the game, you’re a driver in a Death Race-style reality TV show. Explosions mean ratings, don’t you know.

It’s a real clean HUD on display here too. Where some drivers get cluttered with onscreen overlays of lap times and speedometers, Split/Second: Velocity houses all the info you need in a discrete floating tickertape beneath your vehicle. Not only does it allow you to fully gorge yourself on the havoc you wreak, but also means you never have to take your eyes off the track to check lap times and positions.

It’s still a long way from finished, but Split/Second: Velocity is definitely steering in the right direction. If the development team can tighten up the handling and polish off the assets, Black Rock Studios might have another winner on their hands, as well as a load of virtual car crashes on their consciences. Look out for this one on the Xbox 360, PS3 and PC by the 21st of May.

Click below for a gallery of images from Split/Second Velocity’s Downtown track.