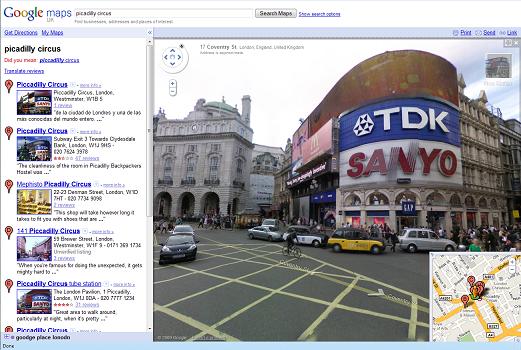 Nat King Cole may have “often walked down the street before”, but he could never of dreamed of planning his route on a fancy mobile phone using Google‘s amazing Street View service. Google now have announced plans to map every single road, rural or otherwise, in the UK from Street View, making virtual tours of the entire country possible.

The service allows users to zoom in from Google Maps right down to pedestrian level, and virtually walk the streets using a 360-degree photographic viewpoint. The service has also lead to a whole host of funny and weird sightings unwittingly captured by the Street View cameras.

Street View initially covered 25 towns and cities in the UK, and has grown steadily since. However, this announcement marks the beginning of the most substantial UK upgrade the service has seen since launch.

Ed Parsons, Google’s geospatial technologist, said: “Street View takes mapping to a level not possible before. And with so many practical applications it’s no wonder that over two-thirds of people who had tried the service said they would use Street View again.

“This new imagery of so many stunning British places means it’s the ideal time to start planning a trip, kickstart a house-hunt or simply ensure you never arrive late to a meeting again,” Parsons continued.

If you haven’t already, head over to //maps.google.co.uk/ to give the service a go.