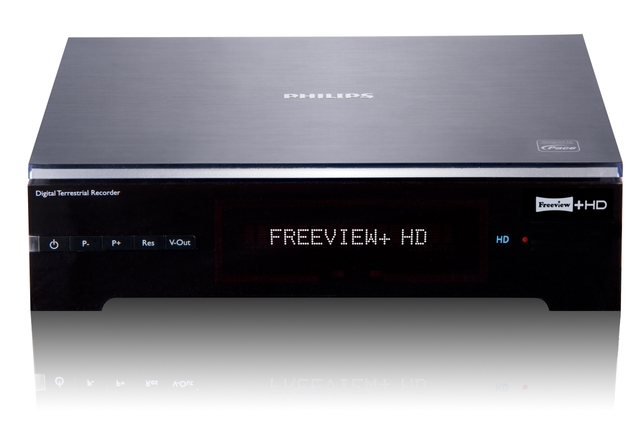 Philips have timed the launch of their new HDT8520 HD PVR and DTR5520 HD receiver set-top boxes to perfection. Packing in Freeview+ HD receivers as the high-def channel list continues to grow and just in time for the World Cup, these sleek-looking new items from Philips could be sitting pretty underneath your HD TV this Spring. Here are Tech Digest’s first impressions after our quick hands-on session.

First up is the HDT8520 HD PVR. Broadcasting and recording Freeview HD channels, its 500GB HDD can store 125 hours of high-def content or 250 hours of standard definition broadcasts. There’s an upscaler inside that will boost standard definition content up to 1080p, while the broadcast resolution itself ranges from 720p to 1080i.

The 8 day EPG was very easy to navigate, with a dedicated back button to jump straight back to the previous channel watched. Most impressive was the recording library, where a picture-in-picture preview of your stored shows was shown. Recordings are automatically protected, making the dreaded accidental wiping of a series finale a thing of the past. Dual receivers also mean that one channel can be watched whilst another is recorded, and there is a series record function too. The box features one-touch recording in increments of ten minutes, with a 3 hour time shift buffer and playback speeds ranging from x1/4 slo-mo to x128 super-fast-forward.

Next up was the DTR5520 HD receiver set-top box. Again receiving Freeview and Freeview HD channels, it features the same EPG, upscaling tech and HD resolutions as the PVR, minus the recording functionality. As a result, the set-top box is a shade slimmer (290x37x160mm), and consumes less than <6W of power on average. Both boxes also feature a USB port for photos and MP3s (sadly no video playback) and an Ethernet port for any future software updates.

It was an impressive showcase. Both the Pace-built boxes were very responsive, with little lag between inputs and the commands shown onscreen. Philips proprietary EPG styling is simple to use, and the low carbon footprint across both models was again impressive.

We’ll have a full review soon, but for now gorge yourself on the gallery of images below.