If you live in the UK and look outside your window today, odds on the world around you is covered in snow. It may have been a good laugh when you were little, hiding stones in snowballs and peeing your name into the snow (you little deviant, you), but these days all it inspires is a moan, a groan, and the thought of a long journey home.

So, to help pass these next few snowed-in days, here are a couple of gadgets for both the snow-phobic and fanatic in each of us.

The sort of item Inuits only dream of, why not invest in an electricity powered vest? Made from nylon and polyester with a heating filament across the back, it is powered by a hidden ultra-safe battery pack which can be switched on or off as required. Already got one? Look how cool you look now! No, seriously…

It’s so cold that you’ll likely want to stay in right now till the snow thaws. You may not even want to get out of bed, let alone hit the shops to pick up some reading material. What you need is an iRiver Story e-reader. With a 6 inch E-ink display, QWERTY keyboard and enough storage space for 1,500 books, iIt gives the most bang for your buck right now in the e-reader market, and will keep you entertained until someone comes to dig you out of your snow covered hovel. Pick it up here for £195.

Perhaps you can’t get enough of the snow? Not only are you an idiot, but you’re in luck too! Turn your living room into a winter-wonderland with the Snow Storm Snow Machine! For £109.95 you can spray fake snow anywhere you want, anytime you want. I wouldn’t recommend eating the stuff though, unless you enjoy trips to A and E. Grab one here. 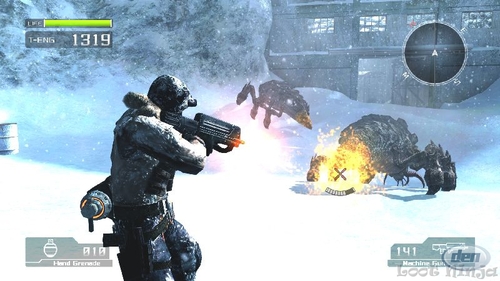 Imagine the best bits of Starship Troopers and the snow scene from Empire Stikes Back. Then throw in some Transformer-like robots. Then throw in some more snow. And ice. And more snow. Mix it all together and you have Lost Planet, Capcoms excellent sci-fi shooter for Xbox 360, PS3 and PC. It may be a few years old now, but it’s still amazing fun taking on the colossal Akrid snow aliens, and there’s a sequel on the way later this year. Its age means you can pick it up cheap now too. Which is cool.

If you think you’ve got it bad, spare a thought for the poor folks of the 1972 Uruguayan rugby team. Their chartered plane crash landed in the snow-capped Andes. With no supplies and freezing snow cold all around, they begin to die of cold. The survivors then had to eat their dead mates. ‘Nuff said. Sadly, it’s yet to reach us in gory high-def detail on Blu-ray, but you can pick it up here from Amazon on DVD for £3.98.

One thought on “Survive the snow with these cool gadgets”