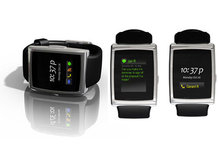 . The device goes overground today, with news of the inPulse Smartwatch hitting shops by February.

Not made by RIM, the watch has instead been developed by the company Allerta who are based near the Blackberry makers in Waterloo, Canada.

The inPulse will have a 1.3 inch OLED display and Bluetooth connectivity, allowing users to sync the watch with their handset to receive alerts on messages, emails and more. A small vibration will announce the arrival of new messages, keeping the Blackberry handset safely tucked away inside a pocket. A single 30 minute micro-USB charge will give the inPulse four days of battery life.

However, the watch will merely act as an extension of your Blackberry screen, and will not feature any functions that will allow you to interact with or respond to messages received.

The watch will retail for around £90. Though there is no confirmed UK launch date as yet, it would be surprising not to see it reach our shores shortly after the February US launch.