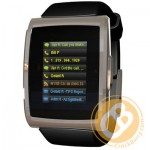 The first pictures of a Blackberry Bluetooth watch have been revealed today. The timepiece has been floating around the rumour mill since the Summer, but these new renders suggest its release may be closer than first anticipated.

Hooking up to your Blackberry via Bluetooth, the watch (said to be named the inPulse) will allow you basic access to your Blackberry, and will alert you to any new messages received without the need to fumble through your pockets for your phone.

The watch will apparently feature an OLED screen, which should be sharp enough for those looking to check their email on the watch-face.

As the watch is made by an accessory company and not RIM, the watch isn’t actually branded by Blackberry, though we’d wager there will be full support for the device if it proves itself a success in shops.