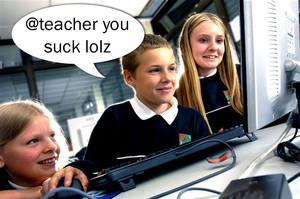 The UK government announced today that it wants to teach Twitter in primary schools as part of a campaign to make online communication and social media part of the national curriculum. Kids will also be taught to use Wikipedia, how to blog, and proper typing skills alongside traditional handwriting skills.

The plans, which also remove the Victorians and Second World War from the primary syllabus, were going to be launched next month, but leaked early in the Guardian. Analysts and teacher groups have cautiously welcomed the moves, though they wonder why current trends are being given so much weight.

Personally, I’m glad that Wikipedia, blogging and proper keyboard usage are being taught – all of those are, for the moment, here to stay. I’m a little confused, though, as to why Twitter has been singled out. It’s not that revolutionary and, even speaking as a heavy user, it’s current prominence in the news is surely no more than a passing media fad caused by high-profile celebrities joining up. Students should certainly understand online communication, but I’m not convinced Twitter is the best way to show them.

What do you think? Tell us on Twitter – and no, the irony of that isn’t lost on me – @techdigest.

One thought on “Twitter to be taught to ten-year-olds”