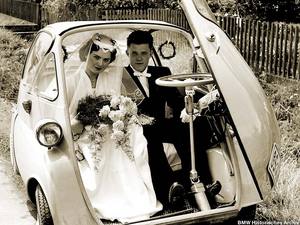 This morning, Spotify and 7digital announced a ‘strategic partnership’ that’ll let Spotify users click straight through to buying MP3s on 7digital. Although I’ve awarded both of them an official Tech Digest badge of awesomeness in the past, the tie-up isn’t much more than the sum of its parts. Let’s have a look at five other dream partnerships that could really rock the world of digital music.

Once, not long ago, that would have read “The Beatles”, but the Fab Four’s estates have now given the thumbs up to Beatles Rock Band, so the net has to be cast a little wider. There are still a few digital standouts – most notably Pink Floyd but also Led Zeppelin – that haven’t worked very much with the Guitar Hero or Rock Band developers.

Other holdouts – Metallica, Tool and AC/DC have reneged on their digital hesitancy to get more heftily involved with the series. Tool provided artwork and several songs to Guitar Hero: World Tour, and Metallica are producing their own version of the game.

Top of my list, though, is Pink Floyd. As a massive fan of The Division Bell, I can’t think of anything more awesome than twiddling my way through “Coming Back to Life”. Blasting through ‘Money’ on bass in 7/4 time would be awesome, too.

This might be a bit of a contentious one, and it’s probably the least likely of the lot, but it’s also the one that could prove the most fruitful. The major labels have the content cracked – the one thing people don’t say about them is that they have bad taste in bands – and Bittorrent is one of the most efficient distribution systems that there is.

If a major label set up a subscription-based Bittorrent tracker, where for £5 or a month or equivalent people were free to download and share playlists of as much as they like of that label’s content, then there’d be umpteen different benefits for the label.

Firstly, people in the community would emerge as tastemakers, who’d be great for the label working out which acts can sink or swim. Secondly, they’d not have to worry about distribution at all – the more popular an act, the faster everyone’s downloads would be. Lastly, they could easily track the relative popularity of different bands and allocate the revenues accordingly.

Last year, I met with a senior staff member at Namco Mobile over my allegations that ‘mobile games are almost always awful’ – a view that I generally still hold. We had a good chat, and respectfully differed on a few things. But then I told him that he should convert Audiosurf to mobile.

He looked confused – ‘what’s Audiosurf?’. I explained that it’s a game where you load in whatever MP3s you like, and then it generates a track for you based on that song, where fast bits slope downhill, slow bits slope uphill and obstructions appear in time with the beat. You then race along the course, picking up blocks and lining them up in a grid.

It’s basically a bit like iTunes playing Tetris at WipEout. It’s absolutely perfect for mobile – short games, low graphics requirements, and global high scores uploaded via internet connections. Plus that compulsive ‘must beat the high score’ factor that’s seen me listen to far more Girls Aloud songs than anyone ever should.

If you want to see what I’m on about, then the game costs just £6, and there’s a free demo available too. Go check it out, and then think of how cool that’d be to play on the bus.

Thanks to @filiphnizdo for the tip on this one, because I wasn’t aware of the awesome-looking Ninjam until this afternoon. It’s crazy collaboration software that lets musicians jam with each other.

Think that’ll result in a latency mess? You’d be right, except that it delays the playback of your tracks to other musicians until the end of a bar. You’re playing along, therefore, with what the other musicians were playing during the last bar. As a result, it doesn’t work so well for pop music, but works brilliantly for more ‘jam’-y genres like jazz and post-rock.

Freesound, on the other hand, is a database of samples with creative commons licenses that anyone can use. A tie-up between the two, therefore, would be fantastic for the creation of sample-laden, gently evolving tracks – a bit like Lemon Jelly or Boards of Canada. It’s got to be moddable into the software, right?

But I’ve saved my absolute favourite for last. A tie-up between Spotify and Last.fm, with the former supplying music and the latter supplying the social network and recommendations functionality, would be the best thing since sliced bread.

Will we ever see it? Despite Spotify’s advances, Last.fm has been a little tight-lipped on the subject. Part of that is that it’s got its own problems to deal with at the moment. Part of that might also be that it thinks it can replicate Spotify’s functionality itself without their help. Whether that’s true or not, Spotify has the buzz right now – and Last.fm doesn’t. You can’t disregard that factor.

What would be your dream matchup? Drop us an email – [email protected] – and tell us, and we’ll showcase the best of your suggestions in a future post.