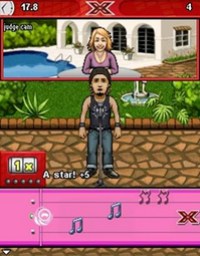 Who decided this was a good idea? Mobile games are almost always awful, and so is the X-factor, so putting them together multiplies the awfulness. No, worse, it squares the awfulness. No – that doesn’t even come close. I’d say it’s the veritable factorial of awful. Or, awful! as I should probably refer to it as.

Ahem. Away from mathematical diversions, this game features an “interactive role-play based experience”. You create a performer, and play a bunch of minigames including choreography, singing, “fan meeting”, “fashion dash” and “groove”. You then fight to win the competition and get a number one single.

If, and I pray that that’s a big if, you want to try it out yourself, then it’s available now across all major UK operators, including 3, Vodafone, Orange and T-Mobile, or by texting ‘fame’ to 80100. O2 users will be able to do the same from the 27th October.