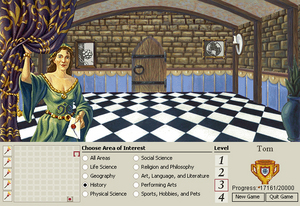 Microsoft’s encyclopedia software, Encarta, has finally had its plug pulled. In June, the software products will disappear, and on October 31st 2009, the website will go too. Japan gets slightly longer, until December 31st 2009.

Microsoft has an FAQ page dedicated to the subject, which sets out why the project is getting axed: “The category of traditional encyclopedias and reference material has changed. People today seek and consume information in considerably different ways than in years past.”

Basically, it’s saying ‘people use Wikipedia, so we’re giving up’. Fair enough, I suppose – it’s increasingly difficult to compete with the crowdsourced project, and it’s good that Microsoft isn’t kidding itself that it can, like it is with Games for Windows.

What I’ll miss most from Encarta is Mindmaze, which I spent many happy hours on at school once I’d got past the orbital simulator and had enough of listening to Martin Luther King’s ‘I Have a Dream’ speech.

Mindmaze was a quiz where you had to travel through a medieval dungeon answering questions to progress. It featured inappropriate cleavage (pictured) as well as insane non-sequiturs from the court jester stood on a big blue box and the creepiest alchemist ever. Ahh… happy days.