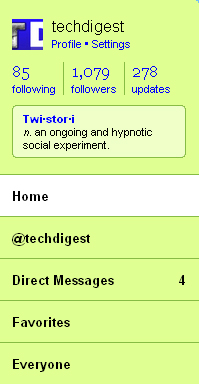 Twitter has changed the term “replies” to “mentions” for a reason of pure semantics. Before any hardcore tweet heads out there start freaking out, nothing has actually changed or very little anyway. All the same, let Uncle Dan take you through it step by step:

Notice a section of the Techdigest Twitter page on the right. We shall call this Exhibit A. Note how Exhibit A now reads “@techdigest” where is used to say “@replies”. It said that because before it would only pick up @replies if @whateveryourusernameis was written at the start of someone’s tweet, ignoring all the times your user name might feature later on in the message.

So, Twitter has got wise to this and is now sensitive wherever you mention someone’s user name. So, to let us know, they’ve started calling them “mentions” instead of replies. Make a big difference to your life, that one? Here endeth the lesson.