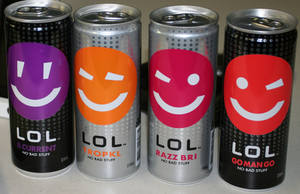 Kids, just say no to LOL. That’s the message coming from Bankstown Grammar School in Sydney, where the carbonated fruit juice is being consumed as a breakfast beverage by children as young as six.

Despite the claims that the side of the packaging make about the soft-drink containing “no bad stuff”, each can contains 26mg of sugar, and the design – with its large smiley face and colourful labelling – has been criticised for looking similar to the Red Bull design.

Personally, I think the children are in more danger of having a lexicon similar to that of your average lolcat thanks to the four flavours the drink comes in: ‘B current’, ‘Tropkl’, ‘Razz bri’ and ‘Gomango’. I am oddly drawn to the drink though – if they were available in the UK, I’d definitely give a can a try, just for the lols, naturally.