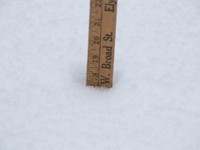 Four inches? Five? Twelve? I’m talking about the snow, you filthy individual. You might have noticed the white stuff accumulating outside at an alarming rate today – at the time of writing it’s still coming down in North London – and you’re probably starting to worry if it’s ever going to stop.

I can assure you, it will. As for when – well, it’ll probably be sunnier tomorrow, but then go back to sleety snow for the majority of the week. But you want more detail, right? Right. Well, here’s my top five places where you can track this week’s snowfall online in-depth. Click over the jump to begin.

5: #uksnow Tweets
Let’s start with the wisdom of the crowds. The wonderous @benmarsh has put together a Google Maps/Twitter mashup that tracks people tweeting using the hashtag #uksnow. To participate:

4: BBC Weather
That might sound like a cop-out to you, but the BBC Weather site is actually fantastic. Unlike many of its competitors, BBC Weather forecasters all have meteorologically-related degrees and tonnes of forecast experience. All forecasts are inherently inaccurate, but you’ll find the Beeb’s to be among the best.

In fact, the BBC has just launched a fantastic new weather site. It’s got animated maps of the country, ‘favourite locations’, and nearest observations, as well as weather news and round-ups of each month. I highly recommend taking 15 minutes and having a good nose around.

Dundee University maintains an archive of polar-orbiting and geostationary satellite images. They come in massive resolution, and you can clearly see the UK, though slightly tilted, given that they’re directly above the equator. Ridiculously impressive though – really gives you a scale of the planet.

You’ll need to register to get to the juicy bits, but it’s relatively quick and painless. Once in, go to ‘Home for Registered Users’, pick a satellite, and off you go! Remember that visible wavebands are mostly useless at night, so the only relevant image there will be the 1200UTC one.

Westwind.ch served me well through my degree as the best place to get the Met Office’s latest official analysis charts. But that’s not all it does – it also links through to any other kind of weather map that you’d ever want.

Want lightning strikes?. Latest obs? Webcams? Rainfall radar? It’s got everything that a weather geek could ever wish for.

Lastly, I wouldn’t be able to recommend any sites without mentioning the buzzing Netweather forums. They’re heaving right now, with discussions as highbrow as angular momentum and as silly as ‘Post Your Snowman‘.

There’s even some hopeful talk in the severe weather section of thundersnow, which I’ve unfortunately never experienced myself, but would love to. The best bit of the site? Their “Snow Risk” page. 87% chance for today!