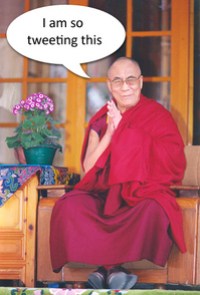 The Dalai Lama isn’t the first political leader to join the microblogging phenomenon Twitter, but he might be the first religious leader. Well, the first real one, anyway.

His Holiness, or @OHHDL as he’s known on the site, has been networking like crazy, sending 46 updates and accruing 20,000 followers in just two days. Some of it is just sending out links to his other web presences, but there’s a smattering of other stuff, too, including the wonderful statement: “I’m sure HH will be just as inquisitive about technology as he has been over the past 14 reincarnations”.

Note: this post nearly contained a “Twibet” pun, but I thought better of it after seeing @natelanxon’s rant this morning.

UPDATE: Sadly, as BritSwedeGuy points out in the comments, this account turned out not to be real. The post of first religious leader on Twitter therefore remains wide open.