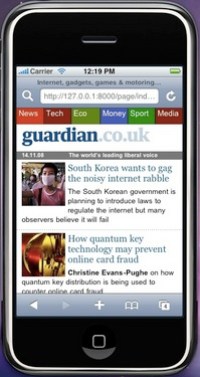 I read newspapers on the bus in the morning. Not on paper – that’s expensive, wasteful and a bit of a hassle – but on my humble Nokia N95. I start with mobile Techmeme, then hit up Google News for the big stories, then over to the New York Times, because their mobile site is one of the best there is.

If I was forced to pick up a paper copy of the newspaper, it’d probably be the Guardian. Their website’s second only to the BBC for me, when it comes to online, too. That’s why it’d be nice to get the paper’s editorial perspective on my phone. And now I can!

It won’t be a moment too soon. Although phones are starting to get better at displaying the full internet, it doesn’t take much to slim down your page load times and shrink the photos, and many people won’t have full-internet capable phones for a few years.

What’s your experiences with mainstream media on mobile devices? Share them in the comments.