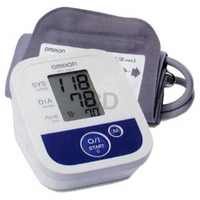 Here’s how Steve Jobs can ensure he lives to be 100 – or more – thanks to the modern technology he loves and has helped shape, guaranteeing peace of mind for all Apple fans and the company’s panicking shareholders.

1. PORTABLE DEFIBRILLATOR The worst case scenario can be averted. Steve needs to employ a nurse to be with him at all times, ready to pounce with the Philips HeartStart Home Defibrillator should he collapse while ordering the Coffeee of the Day from the local Starbucks. Pay her minimum wage and you’ve got 24-hour-a-day Steve reassurance for less than 20k a year.

2. BLOOD PRESSURE MONITOR A cheap, standard high street blood pressure monitor would reassure us all of Steve’s health. An Apple engineer could add a wi-fi adaptor and have it feed data to the Apple web site, letting the world see a reassuring count of Steve’s current blood pressure in real time.

3. SHOEI X-SPIRIT CRASH HELMET If Steve was to fall over and bump his head, the results for Apple, its shareholders and fans would be devastating. We therefore propose that Steve encases his precious brain in a Shoei X-Spirit Helmet, the finest cranium-padding money can buy. You can’t put a price on Steve’s brain stem and frontal lobe! The matte black will also match his outfits.

4. PANIC ROOM Wherever Steve lives is not safe enough. Remagen Safe Rooms will install a “panic room” for a few thousand dollars, ensuring that should armed robbers break into Steve’s house desperate to steal the ideas from his head or his precious prototypes, Steve can lock himself safely away behind a wall of reinforced steel and radio for help.

5. MUSCLE TONING BELT Come on, Steve. Bulk up! Make those investors see you’re healthy and as strong as an ox! A handy Muscle Toning Belt will fit discreetly under your GAP jumper and you’ll be RIPPLING within months – and Apple shares will rocket when new buff Steve emerges.

6. BOTTLED OXYGEN Breathe, Steve, BLOODY KEEP BREATHING! Normal air is too dirty for Steve – those evil nano-particles and free-radicals could be of danger, so we suggest Steve breathes nothing but the finest tinned oxygen from now on. He can afford it and he’d probably be allowed to buy it on expenses anyway. From here.

7. NELL MCANDREW’S ULTIMATE CHALLENGE WORKOUT DVD A healthy Steve is an alive Steve! And what better way to keep in shape than keeping in shape while simultaneously wondering how Nell McAndrew keeps the pounds off her hips? Mrs Jobs won’t mind. It’s in the public interest.

8. FAKE TAN A pale Steve is a possibly SICK Steve – so layer on a bit of bronzer, Jobsy, and start looking like the laid-back California man you really are. Steve appearing in public looking brown and healthy would add at least 10% to the Apple stock price. And its only £12 for a huge bottle.

9. UV METER But pale old Steve could run the risk of developing a severe skin disorder should he spend too long out in that harsh Californian sun bronzing up for the shareholders – so the £3.75 spent on a UV Meter would surely pay for itself, even if it only extended Steve’s life by a week.

10. PANIC ALARM Imagine how much calmer the Mac community would feel if they knew Steve could radio for help at any moment. Again, an Apple technician could add WiMAX support, wire this up to the internet, mash it up with Google Maps and get it to send out an alert to any iPhone or Mac user in the vicinity – allowing the nearest Mac-fan to rush to Steve’s aid and give him the kiss of life in a crisis. The world is ready to keep you going, Stevie!