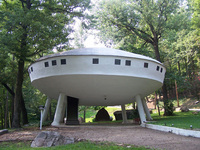 A gentleman who used to work for the Ministry of Defence has said that the RAF has been trying, unsuccessfully, to shoot down UFOs for years.

Nick Pope, who worked on the MoD’s UFO desk for three years, told the Sun:

“We know of cases where the order has been given to shoot down – with little effect to the UFO.”

According to Pope, pilots only open fire if they consider the UFO to be a threat to UK airspace which is probably about every time they show up at all. I can’t imagine most pilots not thinking there’s much of a threat when faced with an enemy both uncommunicative and with technology way in advance ourselves.

Despite the RAF’s efforts to date, Pope does believe they’ll bring one down eventually. “We’re developing increasingly sophisticated weapons,” he added but unfortunately, we, the public won’t know much about it “unless it comes down in a heavily-populated area”.

Now, is it just me or does anyone else think it may not be a good idea to go taking pot shots at UFOs? Isn’t that a bit akin to egging someone’s house or going up to Mike Tyson and flicking him? How can it be a good thing to bring one down?

Either we manage it and the entire rest of the fleet from Klentdathu comes down to freak their revenge or we don’t and it just convinces a benevolent extra-terrestrial life that we’re a planet of nasty, aggressive little upstarts and that making any contact with us or helping our advancement in any way would be an incredibly bad idea. Nice one MoD. Keep up the good work.