It’s like the last days of the Roman Empire in Nintendo’s American HQ. Fresh from selling a record-breaking 3m DS units and 2m Wiis in America during December alone, the power-crazed toy company has now claimed it’s two machines are responsible for 99% of the growth the game industry saw during 2008.

Nintendo sent out a graph. This might mark the precise moment in time the company got too big for its boots. 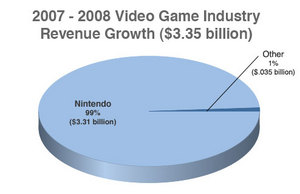 The stat behind this ludicrous claim is that the US games industry took $3.35 billion more during 2008 than it did in 2007, with Nintendo lifting its personal share by $3.31bn. It’s all too much money to really mean anything to us commoners, mind.