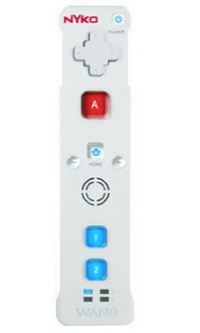 Is Nyko allowed to do this? Can it really be completely OK for it to make such an inch-perfect clone of Nintendo’s Wii Remote and then sell it to people like it’s its own idea?

Apparently so, as the Nyko Wand was freely displayed above-the-counter at CES 2009, and no police were called to have it seized and taken away.

Matching the size, functionality and layout of the standard official Nintendo Wii Remote precisely, Nyko reckons its offering is better than Nintendo’s thanks to “Trans-Port technology” – which lets the remote output signals to additional attachments, adding vibration and force feedback to wheels, guns and other bits of white plastic companies convince children to buy.

It might be a bit shameless, but if Nyko can shave a fiver or even a tenner off the ludicrously high price Nintendo charges for an official Wii Remote, we’re all for it. We’re rooting for Team Nyko. Long may it resist legal pressure to cease and desist.