iRiver has gone pretty balls out with their lead product at this year’s CES. The iRiver Wave-Home is the kind of gadget you’d expect to see in an early 90s Hollywood vision of the future. I’m thinking Total Recall here.

It doesn’t look unlike a digital photoframe with its WVGA 7″ TFT-LCD screen but that’s about where the similarity ends. It’s an attempt at what a marketing department might refer to as a game changer which is usually the prelude to a something falling on its arse, but I’m not so sure in this case.

The Wave-Home is a coffe table multimedia device. I can see it lurking on a kitchen work surface somewhere just out of reach of the fat spatterings of the hob and crumbs from a broken toaster. Is that just my place?

The idea is that you hard wire it to the web through one of its two Ethernet ports and then use it as an organiser, an mp3 and wmv player, an FM and internet radio, an SMS/MMS device, an internet phone and, thanks, to the 1.3-megapixel CMOS camera built in, a video phone as well. Naturally, straight web browsing is also supported along with a widget based OS. 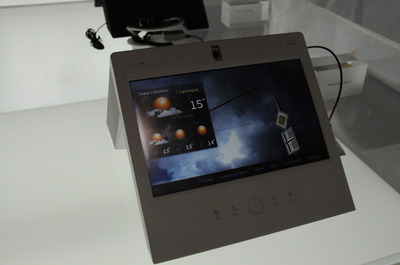 All of that lot can be controlled through the touchscreen with your finger or accompanying stylus and there’s all kinds of SD card slot, USB and 1GB of flash memory to help you out too.

It comes with a wireless handset for phone calls that nestles so neatly into the back that I didn’t even notice the thing to begin with and perhaps the only real downside to this device is that you need a DC wire to get it to work.

iRiver are calling this a concept for now but there were a number of apparently fully functioning models in Vegas and I’ll wager they’re just testing the water before they start mass producing the things. 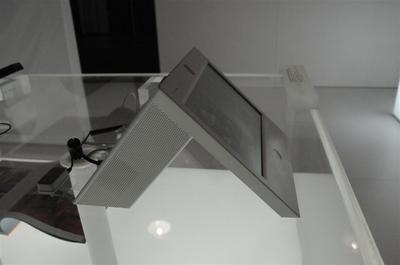 Would people want them? Hmm. I suppose the question is would I want one? Would I use it? It’d need to support more media files. It’d have to be completely wireless, but if iRiver could sort that out, I’d be all over it. It’s gadgets like that that might finally make video calls take off in the West.