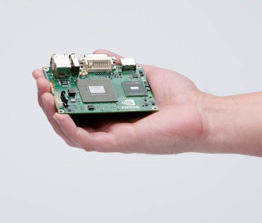 Nvidia has unveiled its Ion Platform, based upon the GeForce 9400, claiming that if it were to be put into an Intel Atom-based netbook it could allow high definition footage and high-powered games to run with ease.

Nvidia reckons that the GeForce 9400 offers up to ten times the performance of the integrated graphics solution that comes with the Atom chip, featuring 16 processing cores and 52 GLOPS of processing power. Therein lies the problem, though: Intel’s Atom comes with its own integrated graphics, so separating it and allowing other manufacturers to sell their own GPUs along with the main processor is going to require some lobbying of Intel.

Get that bit right, and the likes of Call of Duty 4 and Spore, plus full 1080p high definition video, could be a reality on a netbook. Whether you want to play games like this and squint at HD video on such a small screen is another matter, though of course you could always output it to a larger monitor.