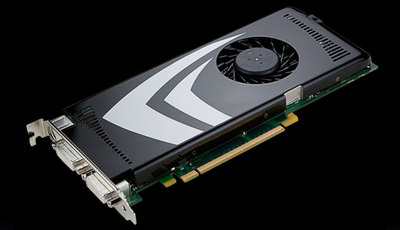 NVIDIA normally likes to make a big fan fare of its new graphics card announcements, using words like ‘ultimate visual computing experience’ and ‘visual computing revolution’. But this rousing lingo is reserved for its top end models; the ones designed for people who build PCs costing nearly as much a small family hatchback.

The poor old 9600 GSO gets no such honour; NVIDIA just made do by dumping the details on its website and pretending like it had no idea how it all got there. In spite of that though, this could be a pretty important card for the PC gaming market.

First, the specs: it uses 96 stream processors, core clock speed is 550MHz, shader clock 1375MHz and memory clock 800MHz. Despite offering more processor cores than its higher end brother the 9600 GT, the GSO’s memory has been nerfed a bit, offering a 192-bit interface with 384MB RAM. You can also use two GSO cards in an SLI array.

If you aren’t familiar with what all these numbers imply, it doesn’t really matter. The price alone will tell you pretty much all you need to know about what kind of a performer it’s going to be. The curious positioning against the 9600 GT has raised a couple of eye-brows though, but this card is clearly designed to challenge the rival ATI Radeon 3850 which is currently a few quid cheaper than the GT model.

Online retailers are putting a price tag of around £80 on it.

Right now the PC gaming market is in disarray. Experts are strongly divided over whether the whole PC games business model is folding beneath the weight of competition from the console sector, whether piracy is killing the few retail sales it can win or whether the industry is in fine shape and merely going through the next steps in its evolution. Whichever way you do look at it though, the fact is that the sheer number of PCs out there should give PC gaming a huge advantage.

However, in part due to the widespread use of onboard graphics processors which are cheap to make and utterly useless for gaming, the market has got stuck in a kind of limbo. NVIDIA might not have wanted to crow about its cheapy new graphics cards, but for PC gaming to hope to compete against the might of the current and next-gen consoles, the prices of gaming hardware will have to come down.

NVIDIA (via The Reg)