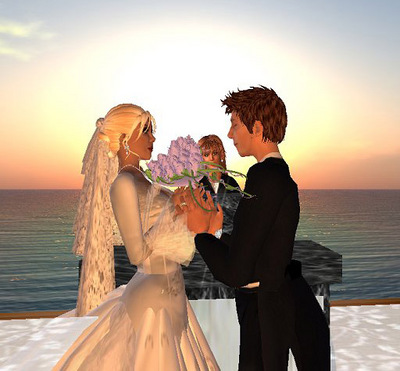 Poor old Amy Taylor, 28, of Cornwall, has filed for separation proceedings against her husband of three years after catching him red-moused having a virtual affair in Second Life. The sword analogy comes in because it was online where she met him in the first place.

The couple met in a chat room in 2003 and were shacked up six months later before tying the knot three years ago both in a registry office and in the game itself. But trouble started when Amy caught 40-year-old hubby David Pollard with his trousers down mid-game quite clearly having sex with another person in Second Life.

After what I should imagine was a lengthy argument about the ethics of virtual world morality versus that of the real world, David agreed he wouldn’t do it again. Presumably, however, he had his fingers crossed under his desk when he said this because Amy caught him at it yet again, only this time cuddling up with an American user on a sofa in Second Life

It’s around this point in the story where I can’t resist toying with the rights and wrongs with this one myself. Now, my instinct tells me that having sex with another person in Second Life is pretty much the same as doing so in the real world, particularly if you spend the kind of time in the virtual world as both Amy and David do.

Second Life is Second Life because it’s designed to be just that – as close as you can get to the real thing. But I wouldn’t say that infidelity is as serious in any virtual world. If my girlfriend caught me having sex with a hooker in Grand Theft Auto, I might be a little embarrassed but I certainly wouldn’t consider it grounds for divorce, or even a justifiable bad mood come to think of it.

So where’s the middle ground here? Where’s the threshold? At what point do crimes in virtual reality become crimes in the real world too? But I digress.

As for this sad and, let’s face it, comical tale, Amy did the right thing and stormed off straight down to a solicitor’s who actually said that this wasn’t the first case of divorce through Second Life he’d dealt with.

The divorce is due to be complete next week but it’s not all bad news for Amy. She has since found a new lover. They met playing World of Warcraft.