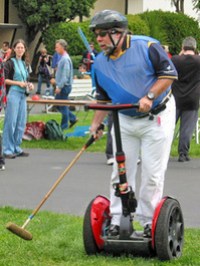 Steve Wozniak, one of the founders of Apple Inc, reckons that the iPod has had its day, and doesn’t like the restrictions Apple have imposed on the iPhone. Wozniak, or Woz as he’s more commonly known, spoke to the Telegraph and said oversupply could bring the iPod down:

“The iPod has sort of lived a long life at number one. Things like, that if you look back to transistor radios and Walkmans, they kind of die out after a while. It’s kind of like everyone has got one or two or three. You get to a point when they are on display everywhere, they get real cheap and they are not selling as much.”

He also speaks out against the iPhone – Apple’s latest flagship product – a view that I certainly share:

“Consumers aren’t getting all they want when companies are very proprietary and lock their products down, I would like to write some more powerful apps than what you’re allowed.”

Lastly, Woz spoke out about the “Cult of Apple”, which often leads some internet commenters (you know who you are…) to defend Apple products to ridiculous degrees and is regularly compared to a religion. Woz said:

“I would like to have the users influence the next generation,” he says. “With a religion you’re not allowed to challenge anything. I want our customers to challenge us.”

Well said, Woz. Although Wozniak is still technically an employee of Apple, and receives a salary from the company, he operates very independently from the technology giant. He’s speaking a lot of sense here, though. Apple needs to listen to its customers, and needs to innovate much faster in the MP3 player market. Don Reisinger at cnet news has a great opinion piece on that latter subject.