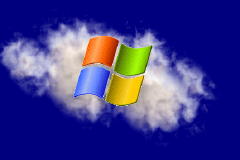 One of the current tech buzzwords is “Cloud Computing”, which basically means using web applications rather than software stored on the computer (it’s more complicated than that, before someone gets pedantic with me, but that’ll do for now).

It’s something that Google has been working towards for some time, with the introduction of its applications and the Chrome web browser, and Microsoft is keen not to be left behind.

Speaking at a conference in London, Microsoft’s CEO Steve Ballmer said that a “new operating system designed for the cloud” would be introduced within the next four weeks.

With an imaginative working title of “Windows Cloud”, it would look and feel very much like existing versions of Windows, but will allow users to create and use their own online applications.

Though the likes of Microsoft and Apple can’t afford to miss opportunities surrounding the current buzz, some industry leaders claim that cloud computing is just a fad.

“The interesting thing about cloud computing is that we’ve redefined cloud computing to include everything that we already do,” said Larry Ellison, CEO of industry giant Oracle. “I don’t understand what we’ll do differently in light of cloud computing, other than change the wording on some of our ads.”

Additionally, open source software guru Richard Stallman said that cloud computing represented a loss of control for the user. One reason you should not use web applications to do your computing is that you lose control,” he said. “It’s just as bad as using a proprietary program. Do your own computing on your own computer with your copy of a freedom-respecting program. If you use a proprietary program or somebody else’s web server, you’re defenceless. You’re putty in the hands of whoever developed that software.”

It seems clear that we’ll see more advanced web applications that could replace or significantly reduce the importance of installed software, but the security, privacy, and control aspects need to be seriously considered.