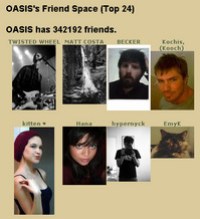 And guess what, everyone? Oasis is still going! The two dinosaurs of social networking and 1990s pub rock have teamed up, with the Manchester band dumping the entire content of its new album “Dig Up Your Soul” for listening to on MySpace right now. I am, at this very minute, listening to a turgid reinterpretation of some Beatles songs, much to the anger of everyone within earshot.

The new album’s not officially released for traditional “buying” until next Monday, with iTunes only offering a digital download of the first single “The Shock of the Lightning” via a rather hefty advert at the top of the band’s MySpace page. Not that you’d need to buy it when it’s already started playing automatically in the background for free.

UPDATE: So, it turns out you can actually buy Dig Out Your Soul, if you’d like, in digital format, to keep and play at will. From 5th October it’s exclusively available from 7digital on FLAC for £9.99 or £1.49 per track. They’ll even chuck you the MP3 version for free once the album officially launches.