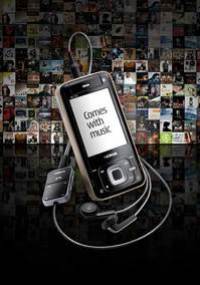 The finer details of Nokia’s “Comes with Music” service have just been revealed to us here at Tech Digest. “Comes With Music” is the latest in a long line of digital music services which have been billed as the saviour of the music industry.

It’s fairly simple. You buy a phone that comes with a “Comes with Music” subscription and for a year you get unlimited music. At the end of that year, Nokia try and sell you another “Comes with Music” phone, but if you don’t take it up, you still get to keep all the music you’ve downloaded in that year. Sounds fantastic on paper, doesn’t it?

Want to burn them to a CD? Fork out for an additional license. Want to play them on a secondary phone, or another PC in your house? You can’t. Want to play them on an iPod, or a Mac? That’s not going to happen in a million years, thanks to the .wma format. You can change the primary PC or the phone associated with your subscription every three months, but four times in a year isn’t much.

“Comes with Music” will be starting in the UK, which makes a nice change from services that are usually based in America. It’ll be available initially on Nokia’s new touchscreen music phone – the 5800 XpressMusic, but other “Comes with Music” devices will follow shortly after. The 5800’s not a bad phone, but it’s not an incredible phone, either.

UPDATE: After I wrote this, but before I published it, this story came out. Turns out (as pointed out in the comments) that the Pay as you Go Nokia 5310 XpressMusic will be the first “Comes with Music” device. Looks awful, in my opinion. No 3.5″ headphone jack, on their first Comes with Music phone? Luckily it’ll also be available on an N95 8GB “Comes with Music” edition.

There’s no word so far of a “fair usage” policy, but I’d be surprised if one didn’t show up relatively quickly. Similarly, I’d be surprised if a tool for stripping the DRM from the file didn’t show up pretty quickly too. No word on how much the “burn to CD” licenses will cost, but if they’re cheap, that could be an easy method of circumventing the DRM – simply burn to a CD and then re-rip.

7digital, don’t like it much, which is understandable considering they sell DRM-free MP3s. CEO Ben Drury said:

Nokia’s new service is an interesting new model for digital music but at first glance seems fatally flawed. Songs downloaded through the Comes With Music service are not in MP3 format and are wrapped in DRM (Digital Rights Management) locks which means the downloads cannot be played across a multitude of music devices including iPods and all other MP3 players.

Nokia claims users will be able to keep any downloaded tracks forever, even if they decide not to renew their contract. In reality, “forever” means for the lifetime of the device (typically 2 years) or computer they download to – users won’t be able to transfer their music to new, non-Nokia devices in the future.

Why would you download music in a format that is so restrictive, when you can get the same music in a universal format that can be played and shared across any music enabled device? MP3 is the only format that works on all devices – MP3 downloads are compatible with any music player, including iPods, iPhones, Blackberries, Sony Walkmans and all other MP3 players.

A compelling music offering needs to escape DRM. The high-quality DRM-free MP3 format is what digital music consumers have been waiting for. We know that consumers see DRM as somewhat of a hindrance when purchasing legal digital music. That’s why on September 16th, 7digital announced it is now selling digital music in high quality (320kbps) MP3 format from all major and indie labels. We believe that quality, compatibility and flexibility are the crucial factors in digital music.”

I wholeheartedly agree. “Comes with Music” promised much, but hasn’t delivered any of it. It’s just a me-too subscription service where the subscription charge is tacked on to your phone bill each month the price of the phone. The device and catalogue restrictions are just icing on the old, stale cake. Don’t even get me started on what happens when they turn the DRM servers off.

But I’m not disappointed, because this is what I was expecting. What Nokia was promising was too good to be true. There was talk of DRM-free music that you could keep as long as you like, but major labels simply aren’t ready to give consumers those kinds of options. One day they’ll realize the value in their catalogue shouldn’t be restricted. Consumers will rejoice. That day will be a happy one indeed.