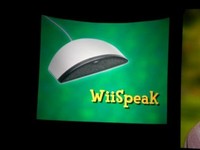 The 5th of December in Europe. The same day Animal Crossing: Let’s Go to the City is released. It’s going to be free, but you’ll need to be hooked up to Wi-Fi and sporting a Wii Speak microphone. Said microphone, surprise surprise, comes bundled with Animal Crossing.

The Wii Speak channel is a little bit like the DS’s underused Pictochat application. It allows four people to speak, and share pictures and text messages. You have to swap friend codes first, though – Nintendo doesn’t want to get embroiled in sexual predator stories in the tabloid press.

Miis will also attempt to move their mouths to replicate words picked up by the microphone. There’s no price on the bundle just yet – but let’s just hope it doesn’t hit the heady heights commanded by Wii Fit or Rock Band.