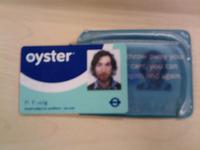 Poor old Oyster looks set to have its name ripped from our mini-wallets and cast back into the sandy estuaries from which it came with Tfl announcing that they’re looking for a new London transport ticketing system.

What with suffering not one but two meltdowns in the last few months and the slight issue of being hacked by some Dutch techies and then facing the embarrassment of having the hack published online, it shouldn’t really be the biggest surprise.

For my money, or virtual travel credits, I’ve actually been quite happy with Oyster. I can’t say I was too thrilled with it to begin with – probably a result of the way we were strong-armed into the deal – but actually I couldn’t face going back to fiddly tickets.

Thankfully, the plan isn’t to do that and it’s all about combining the touchcard with another gizmo, be it a credit card or your moblie phone as already trialled this year.

I suppose part of me will be glad to see the back of Oyster. My original blue and blue wallet has just about expired. It’s so old that you can actually see my face on the plastic when the card is taken out but I refuse to carry around one of those Ikea adverts in my pocket.

Anyway, despite recent issues I think Oyster has been a success. I’m rather reluctant to place even more value on my mobile phone by adding travel credits to it and practically beg someone to grab it out of my hand with them knowing exactly when and where it’ll be seeing the light of day.

Neither do I wish to accidentally spend even more on my credit card without thinking about it properly. However, I suppose it took me kicking and screaming in the first place so maybe I’ll just trust Tfl to do the right thing. I can’t believe I just said that.

Related posts: Oyster card hack released on the net | using your phone as your Oyster card