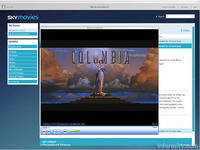 Sky has just added listings from rival BBC’s iPlayer to its own content-catchup service, Sky Player. The new sections carry BBC branding, but just consist of links to play the content in BBC’s own iPlayer environment.

It’s a small move, but I think it’s a really positive one in opening up television content to the wider web. Small round of applause to Sky and the BBC for being friendly and useful to their viewers, though it’s perhaps a little surprising that we’re not seeing the BBC reciprocating the agreement.

In stark contrast comes an announcement from documentary-makers Discovery that it hates the internet and doesn’t want anything to do with it. I’m paraphrasing a little – Discovery president David Zaslav actually said:

“We have opted not to put a lot of our content on to the web. There is not a very strong economic model, number one, and, number two, from a viewership perspective, despite how aggressively others have gone on to the web, the take-up rate is not that strong.”

“We prefer to be on YouTube with clips, to be found by people on the first page of Google. That is Fifth Avenue: it’s where people go to shop,”

Fair enough about the YouTube thing – clips are great – but I don’t agree with any of the assertions he makes about web video. Take-up rate of the BBC iPlayer has been massive, as has the takeup of Hulu in the States. Secondly, the economic model’s always been there, it’s just that broadcasters aren’t making enough of it. Scaling costs are negligible, and duplication cost is essentially zero, so it’s impossible to compare it to physical sales of DVDs.

Discovery is believed to have paid between £8m and £10m for a Freeview slot. The new Discovery Freeview channel airs early next year, and I bet it’ll consist almost entirely of adverts, semi-adverts for Discovery DVDs and chunks of programs that are shown in full on Discovery’s pay channels.

Related posts: “Deepest ever” living fish has been found and filmed – Celebrity Fish Big Brother reportedly in the works | Designer Sky+ HD Boxes to be unleashed on the unsuspecting public