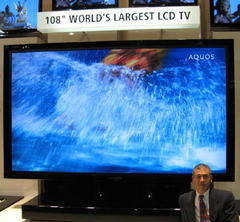 At CES last year (2007), Sharp unveiled its 108-inch LCD TV. As far as I’m aware, despite it being nearly two years since the show, it’s still the largest LCD TV in production (yes, there are larger plasmas) — and now it’s been launched.

This monster comes with eco-friendly features, according to reports, though I bet it burns a helluva lot more fossil fuels up per hour than your piddly little flat-panel TV.

Pricing? Not mentioned, but it’s a fairly safe bet that you can’t afford it, which is just as well as there’s nowhere for you to put it, either.