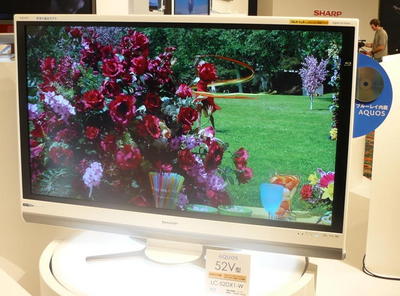 Sharp will launch a range of high definition LCD TVs with integrated Blu-ray recorders in the Japanese market next month, claiming a world first.

While it’s not uncommon to see flat panel TVs with built in DVD and Blu-ray players, this is the first time a Blu-ray recorder has been added to a production TV.

The AQUOS DX range will come in a range of screen sizes from 26- right up to 52-inch, all full 1080p high definition, and ranging in price from around £1,100 to £2,900 (at current Yen to UK pound exchange rate). Though the integrated drive will allow playback of Blu-ray, and recording TV programmes directly to disc, there won’t be a built-in hard drive — so no DVR functionality.

Blu-ray writers are becoming increasingly popular in Japan, but Sharp seems to think the same isn’t yet true of US or Europe, because the company only plans to release TVs with Blu-ray players in the West over the next few months.

I’m not convinced full integration is the way to go for TVs. I’d rather keep the components separate, buying a decent TV and a standalone Blu-ray player. Manufacturers obviously think there’s a market, though. Recently, LG said that consumer research it carried out in the UK showed that consumers wanted TVs with built-in optical drives.

What do you think? Keep ’em separate or pack ’em together?