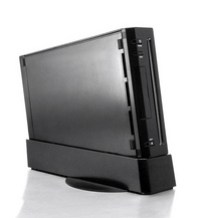 A parents videogames website called What They Play is claiming to have heard from multiple sources that Nintendo is showing a new Wii off in corporate presentations. It’s going to apparently be “Next Generation”, and hit the market by 2011. It’s being referred to as the Wii HD.

Apparently it won’t be a drastic change – like the upgrade of the Gameboy to the Gameboy Advance. There’s talk about digitally distributed content, as well as backwards-compatible games. Nintendo say:

But the canary in the coalmine is Nintendo’s R&D spending, which is currently ten times higher than five years ago. Either Nintendo have some new consoles in the works, or they’re wasting a hell of a lot of money on scientists.

Nintendo (via What They Play)