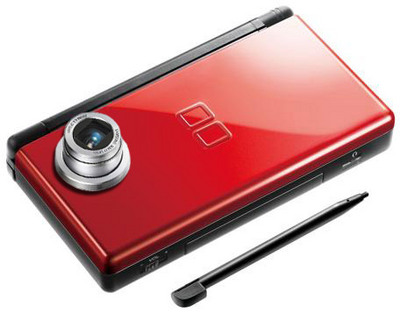 The Nikkei Business Daily reported on Sunday that Nintendo are planning to launch a version of the DS that can take pictures and play music, and here’s the best bit – it’ll apparently be out before the end of the year.

This launch would bring Nintendo into direct competition with Apple, Nokia, Sony Ericsson, and many other technology companies that it currently has no competition with. It’s a smart business move, given the raging popularity of the crossover portable gaming device. However, will people who don’t already own a DS be persuaded by features that are already on their camera, their MP3 player and their mobile phone?

Of course, it won’t look quite as bulky as our artist’s impression above. It’s more likely to be a sleeker camera, more like a mobile phone, or a laptop webcam. Oh, and “before Christmas in Japan” probably means next Christmas in Europe. Especially given that Nintendo have already got new bundles for Christmas over here. Such is the way of gaming life. Sigh.

UPDATE: Nintendo have said “While Nintendo is always working on new hardware, we have not made any announcement about a DS and we cannot comment on the Nikkei story.” That sounds like a “Yes” to me.