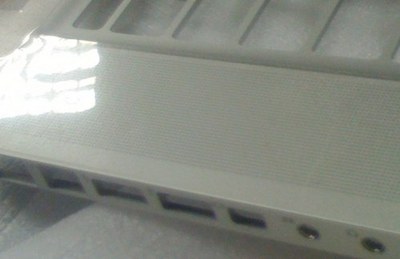 Blurry shots are popping up across the internet of a new Macbook model, which has been anticipated for a little while now. We don’t normally report on blurry Apple photos, because they’re often just the creations of fanboys with too much time on their hands. This one’s notable though – because there’s chatter that it might arrive at a substationally lower price point than current Apple Macbooks.

A source talking to the Inquisitr has shared knowledge of a new price list handed to Apple retail shops in the US. It lists 12 price points for the new Macbooks, where there used to be just eight.

The current range has a minimum point at US$1099 for the basic Macbook, but the new range, however, reaches down to $800. This has lead to speculation that the new model might be a netbook of some description, or perhaps a UMPC. I think that’s unlikely – it’s probably just Apple pricing its Macbooks more aggressively given the current economic conditions.

No UK details have come out, but if you’re a UK Apple employee and you fancy leaking anything then don’t hesistate to let us know – either in the comments below, or by dropping us an email.

Apple UK (via the Inquisitr)