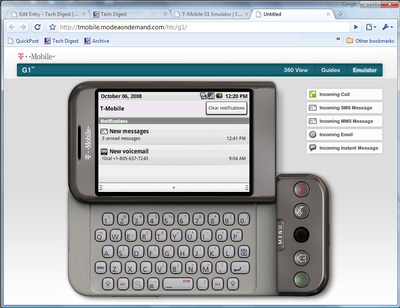 If you’re dying to have a play with the G1, but you’re not as lucky as Susi to have had a go just yet, then this might sate your compulsion, just a little. It’s an emulator for the G1. It allows you to use the phone as if it were in front of you, by clicking buttons and using the touchscreen with your mouse.

The Google Android-powered phone will be released later this month, but in the meantime, you can pore through the menus, functions and features of the satanphone on T-mobile’s website. It’s remarkably comprehensive, but you won’t get a GPS signal, and the internet browser and camera won’t work yet either.

Still, it’s a decent preview, and only helps to build the excitement surrounding Google’s foray into mobile phones. My contract’s not up until March next year, but when it is, I’m going to be seriously considering the G1. Let’s hope that it takes off!