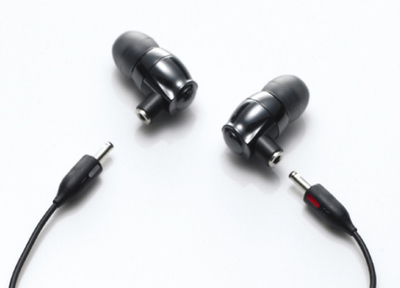 Lastly, the top of the range are the RP-HJE900s, with detachable cables. They were previously only available in black, but Panasonic have just launched a white version too, for all you Apple fanboys (and girls). They’ve got a fantastic frequency response of 6Hz-28 KHz, but their impedance is a little higher at 26Ω – probably due to the detachable nature of the earbuds.

Oh, and if you’re wondering what frequency response and impedance actually are, then here’s a brief explanation:

Frequency response refers to how high and/or low the sound can go – a wider range is better, because it means that the bass can get lower, and the treble can get higher, resulting in more realistic-sounding music. For reference, the human ear can, on average, only hear a frequency response of 20Hz – 20KHz, but that varies wildly from person to person.

Impedance, on the other hand, refers to how much signal you get out. The lower it is, the louder the headphones can go on a lower signal. Low impedance headphones will sound louder when plugged in devices with low output voltages such as MP3 players, etc. Higher impedance headphones are more useful in studio environments, where there’s plenty of signal being pushed out from the amplifiers.

Both are important to bear in mind when you’re choosing headphones, but don’t get too caught up in the specs – price is just as important. Many people, especially those who go to more than a few clubs or gigs on a regular basis, won’t be able to tell the difference between a £50 pair of earphones, and a £500 pair. Don’t buy a £10 pair though – you’ll hear that.