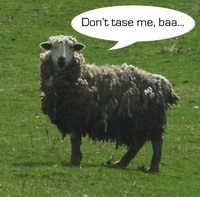 A traffic jam caused by a runaway sheep in North Wales was solved by police using a Taser. The police offer in question, when faced with the problem of how to move a sheep out of the road, decided the best course of action was to pull out his “non-lethal” electricity stun gun, zap the poor beast, and carry it to the side of the road, still twitching. One eyewitness observed:

“We came across a traffic jam and we saw there was a sheep in the road. Everyone had stopped their cars and a few people had got out and were trying to herd the sheep away from the carriageway. The police then arrived and they went towards the sheep but it moved away from them.”

“Then one of the officers got out his Taser gun and fired it at the sheep. Then he carried it to the side of the carriageway. (My daughter) was very distressed. I don’t know if the sheep was alright. When we left, it was lying by the side of the road, shaking. I thought it was excessive to use a Taser on a defenceless sheep. It could have been directed away from the road without using such force and they didn’t even try to herd it.”

It does seem a bit much, tasing a sheep. Couldn’t they just have chased it to the side of the road? Either way, animal rights organizations are rather miffed, with the RSPCA saying they’re going to investigate the situation. The ram has apparently recovered okay, and contrary to any nursery rhymes you might have heard, its wool failed to turn into nylon.

(via the Daily Mail)