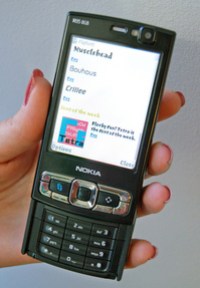 Okay – hands up, font geeks. This one’s for you. If you’ve had enough of watching Helvetica, and you’ve already told everyone you know about the Ban Comic Sans campaign, then you need something else to do with your time, right? How about fiddling with your phone’s font?

There’s been unofficial ways to do it for ages, but they involve downloads off dodgy sites and message boards so you might have been put off. Monotype Imaging and Vodafone, however, are trying to legitimize the whole thing. They’re releasing “FlipFont” – a program which lets you change the font on your phone without mucking about in config files.

The application will launch on the Nokia N73, N95 and N95 8GB handsets. Users will be able to download up to ten scalable fonts, including Musclehead and ITC Stylus. Each will cost a minimum of £1.99, which seems a bit steep compared to “free”, which is what tinkering with the configs costs. On the other hand, buying those fonts costs more like £20, so perhaps it is a good deal. Depends on the font you want, I suppose.

Over time, Vodafone and Monotype Imaging hope to launch the software on more devices, and offer a greater choice of fonts. Odds of it showing up on the iPhone? Miniscule – the prospect of someone viewing their iPhone in ITC Snap might just make poor old Steve Jobs’ heart finally give in.

Related posts: Fancy a font made from Post-It notes? | “Fontastic” time telling with the Font Clock