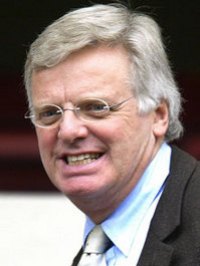 Michael Grade, former chairman of the BBC and the man who moved Neighbours to its early evening slot, went off on one the other day at a broadcast conference in Amsterdam last Friday, labelling YouTube, Joost, and dailymotion.com “content parasites”.

It’s true that there’s a lot of ITV’s content on sites like YouTube, but given that most clips are only a few minutes in length, I genuinely believe that they act more like trailers for full programs. If ITV were to place advertising next to these clips, as YouTube allow, and repeat programs which have the most popular clips, I’m sure that they would increase both revenue and viewing figures.

Grade’s not worried though. He said, “The day that Google or Joost or any of these people start investing £1bn a year in UK content is the day I’ll start to be worried.” Perhaps he should be more concerned – Google has already overtaken ITV as the biggest recipient of advertising money in the UK.

ITV, of course, have a reason to snipe at the competition – they’re desperately trying to get regulatory approval for “Kangaroo” – their collusion collaboration with the BBC and Channel 4, and attempt at edging YouTube et al out of the market. Good luck with that, guys.

Related posts: BBC, ITV & Ch. 4 ask for more time to prove ‘Kangaroo’ is above board | ITV News’ John Ray to appear in the next Smash Bros game?